Home » GENERA D-F » Drosanthemum » Drosanthemum duplessiae
Back to Category Overview
Total images in all categories: 8,965
Total number of hits on all images: 3,976,002 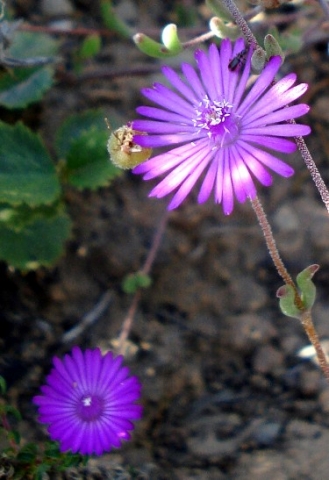 Previous
Image 4 of 24
Next

Drosanthemum duplessiae, the Du Plessis dewfig flowers here in September near Oudtshoorn. The erect to rounded shrub reaches heights of 1 m in its habitat in the eastern parts of the Little Karoo and across the Swartberg on the northern foothills. On the leaf and sepal surfaces the conspicuous dewfig feature of dome-shaped bladder cells that glisten in sunlight similar to dewdrops can be seen.

The pink or purple petals are white at the base. This is enhanced by the white cone of stamens and staminodes in the flower centres. In the flowers shown here the cones are purple, creating some doubt as to identification.