Home » GENERA D-F » Drimia » Drimia intricata
Back to Category Overview
Total images in all categories: 8,965
Total number of hits on all images: 3,975,366 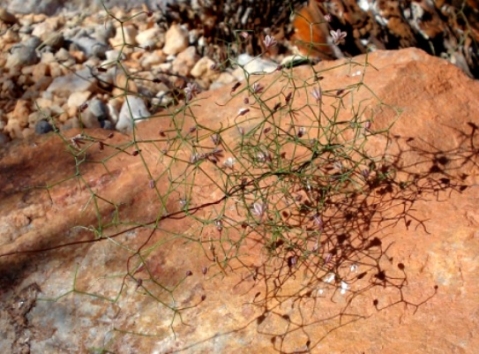 Drimia intricata has a bulb that is partly underground, the top part usually being visible with stems emanating from its top. The stems are wiry and much branched, green and photosynthetic. They grow erectly or sprawl and may be tangled. Young plants bear thread-like, short-lived leaves. The more permanent leaves are tiny and scale-like, each with a small spur growing from its lower side.

The plant grows to heights ranging between 10 cm and 50 cm. The habitat is rocky areas in grassland. This plant was photographed in the west of Namaqualand during April (Lowrey and Wright, 1987; Bond and Goldblatt, 1984; Van Wyk and Malan, 1997).