Home » GENERA D-F » Drimia » Drimia intricata
Back to Category Overview
Total images in all categories: 8,899
Total number of hits on all images: 3,869,539 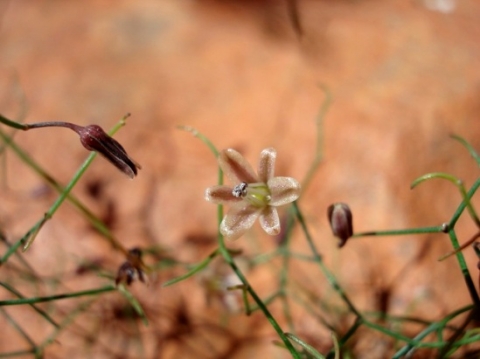 Drimia intricata, in Afrikaans known as volstruiskos (ostrich food), is a bulbous plant in the Hyacinthaceae family. There seems to be confusion as to whether the name has actually been changed from Schizobasis intricata.

Other Drimia species generally have erect scapes with racemes of spread or recurved tepals, often with dark central lines on the tepals reminding of Trachyandra or Albuca. There are about 60 species of Drimia in South Africa, 40 more in the rest of Africa, Europe and Asia.

The genus of Schizobasis is monotypic according to one source; has two species according to another. The idea of more than one species representing the variability in forms observed was not sustained.