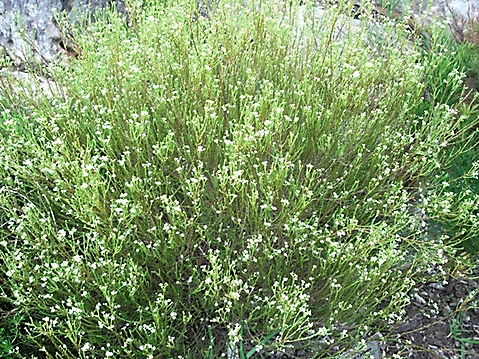 Diosma is a genus of ericoid shrubs and shrublets in the Rutaceae or citrus family, commonly known as bitterboegoe. Their habit is spreading or erect, mostly growing from single stems and not resprouting.

The gland-dotted, simple leaves are opposite or alternate and often overlapping; sometimes stalked and sometimes hairy. The leaf-shape is variable from needle-like to oblong, ovate and circular. Many species have aromatic leaves, intensely when crushed. Only young growth tends to be browsed, sometimes heavily.

The flowers grow solitary or in groups at stem-tips, short-stalked or sessile. Flower diameter is up to 10 mm, usually much smaller. Each flower has a bract as well as two small bracteoles below its five-pointed, regular calyx. The small calyx lobes are usually minutely fringed along their margins that are often translucent.

The five petals are cream, white or slightly red, variously shaped and usually spreading. The five stamens spread their needle-like filaments that end in anthers consisting of two locules each, also with a gland present.

The well-developed but shallow, fleshy disc is five-lobed or sinuate (wavy) and nectar-bearing, sometimes attached to the petals spreading below it. The five-carpel ovary is in the centre of the disc, its style short, not longer than 2 mm.

The fruit is sometimes veined, warted or hairy and has five erect or spreading horns, varying in length.

The genus consists of 28 species, mostly endemic to the Western Cape, while some are found in the western part of the Eastern Cape. All of them grow in fynbos.