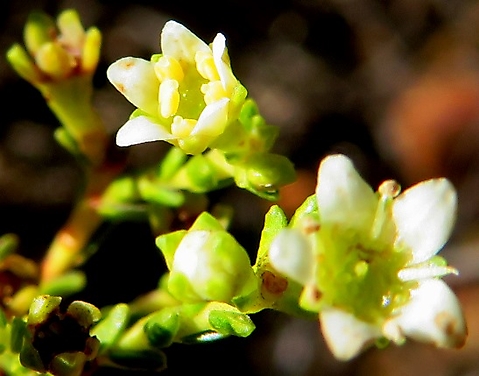 Next in the development sequence is the open flower upper left with large creamy anthers on filaments still short enough to be unseen. What is special about these anthers are the small, rounded glands at their tips, positioned in picture to the inside.

Anther glands are not very common in flowering plants but present in certain families and genera, including Diosma. Such glands have cavities into which sticky substances that are oily or sugary are secreted. These sticky substances play a key role in holding together the pollen grains and attaching them to the bodies of visiting pollinators.

In the older flower (bottom right) the stamens spread, the now smaller, brown anthers hang over the gaps between petal lobes, or have dropped off already. The style is erect, yellow-green in the centre of the jelly-like, green disc that is the upper surface of the ovary and spreads across the floor of the corolla. The disc forms a five-pointed shape, reaching into the gaps where the petals meet.

There are two more, older, fruiting rather than floral structures in picture. They have erect sepal lobes surrounding brown or black ovary tops, within which ovules gradually morph into seeds after pollination.

Botanical reproduction is usually a public affair, out in the open or even up in the sky, for all to witness. There are often animals intimately involved in the joining of male and female components in flowers, as well as later in the dispersal of their offspring, the seeds, when eating the fruits.

Animal mobility makes them different in this respect. Many animal species use the option of conducting these vital activities or part of them privately in nests, burrows or homes, in the dark or even under blankets. While animals may mate in the open, their mobility allows for manoeuvring offspring out of harms way, which is hard for plants with roots being in the ground. Or are pine cones and hard nuts examples of similar plant strategies for reducing "infant mortality"?

These somewhat opposite and still also widely different approaches between plants and animals to procreative problem solving benefit all, in protecting the next generation and in finding food for others. The young of plants and animals are, of course, also similar in being desirable food to many other species. There’s no place to hide one's young perfectly in nature, but statistics favour a survival percentage when numbers produced are sufficient and the evolving of specific survival measures continues as threats change.

The bigger the investment per unit reproduced, the better the protective measures must be for success. Compare an elephant calf with mosquito or fly eggs, or Encephalartos fruits with those of Asteraceae daisies.

Animals and plants are inextricably entwined in each other’s lifestyles and fortunes, for we all share one earth. Everyone is totally interdependent and hopelessly lost without the countless mutual benefit exchanges between the two broad groupings of animals and plants, as well as among everything else that lives (Vlok and Schutte-Vlok, 2015; iNaturalist).