Home » GENERA D » Diosma » Diosma pedicellata
Back to Category Overview
Total images in all categories: 11,901
Total number of hits on all images: 7,142,146 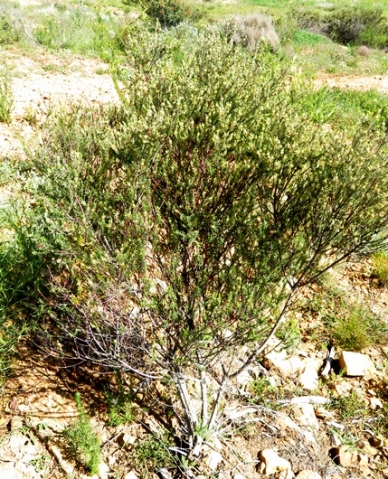 Diosma pedicellata is a rigid, single-stemmed shrub reaching 1 m in height. Diosma, an ericoid genus of the citrus (Rutaceae) family, is commonly known in Afrikaans as bitterboegoe (bitter buchu). The 28 bitterboegoe species all grow in the fynbos. These plants are thought to live for about 30 years on average.

The species distribution is in a westerly part of the Western Cape, from the Bokkeveld Mountains and Nieuwoudtville to False Bay and Stellenbosch. The photo was taken near Piketberg.

The habitat is sandy flats, the plants growing in deep soil. The species is considered to be near threatened in its habitat early in the twenty first century, due to expansion of rooibos and potato farming, as well as invasive exotic plants (Bond and Goldblatt, 1984; iNaturalist; http://redlist.sanbi.org).