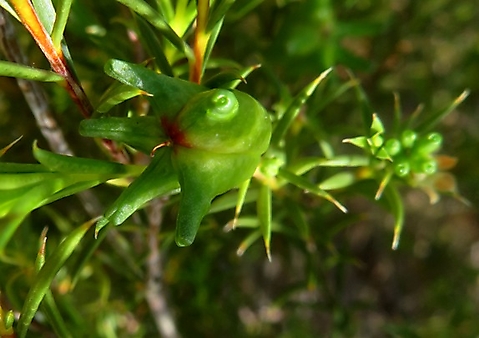 Previous
Image 5 of 23
Next

This green Diosma hirsuta fruit has some red on top. Maybe this brought the plant the Afrikaans name of rooiboegoe (red buchu), although the disc in the floor of the earlier flower corolla cup is also at some stage (or may at some stage be) red.

What is more interesting to the amateur author here is the presence of a central style persisting upon the fruit with its five distinct carpels. It appears from the literature that some flowers such as evidently also D. hirsuta, have one shared style, a compitum, serving all the fused carpels of one ovary. Such flowers are called syncarpous. In other species where the multiple carpels of an ovary are completely separate and functioning independently, the flowers are apocarpous.

In syncarpous flower ovaries all pollen tubes are connected, allowing pollen full access to all ovules within the compound ovary. This increases the probability of more seed to be set. This is the kind of adaptation evolution tends to bring about for improving the odds of life to continue in whatever way possible.

Peepholes into the mysteries of science are important for ordinary mortals. In this way the learning public can enter and increasingly occupy the newer territories becoming old hat to scientists who busy themselves with the newest issues at the knowledge frontier; the narrow end of the knowledge funnel.

At the wide end of this funnel-shaped information distribution system, the debate, dialogue or layman cacophony gains decibels among high curiosity outsiders with many interests and agendas. Digested material is released continually and gradually, cast out like points to ponder or bones to chew on. Tomorrow’s school syllabi are continually adapted to produce another unique generation of learning content, enriched by the additions science recently made possible and unavailable during the schooling of the older, parent generation.