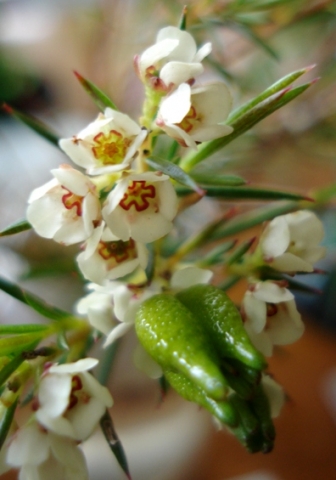 Previous
Image 3 of 23
Next

Diosma hirsuta, commonly rooiboegoe (red buchu) in Afrikaans, is a shrub or shrublet growing to 50 cm from a woody rootstock that resprouts after fire.

The flowers grow in short racemes at branch tips, each bearing five rounded petals that tend to persist as the fruits develop. An interesting angular red pattern made by the disc below the ovary is visible at the base of the flower cups in picture.

The five-chambered fruit, shiny green in the photo, has a horn on each chamber. This shape recurs in other Diosma species with some variations.

The species distribution is along the southern coastal region of the Western Cape, inland to Nieuwoudtville and eastwards to Ladismith in the Little Karoo and Humansdorp in the Eastern Cape. This plant was seen during October in the Fernkloof Nature Reserve, next to the coastal town of Hermanus.

The habitat is sandstone, loam and clay slopes where the plants grow in fynbos and renosterveld. The species is not considered to be threatened in its habitat early in the twenty first century (Vlok and Schutte-Vlok, 2015; Manning, 2007; Bean and Johns, 2005; http://redlist.sanbi.org).