Home » GENERA D » Diosma » Diosma echinulata flowers
Back to Category Overview
Total images in all categories: 11,635
Total number of hits on all images: 6,753,000 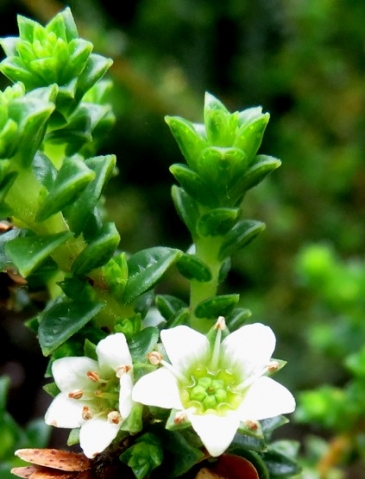 Previous
Image 2 of 23
Next

The small, white or cream flowers of Diosma echinulata grow in few-flowered stem-tip clusters embedded among surrounding leaves with one bract per flower.

The five, pointed lobes of the calyx are visible in the gaps between the corolla lobes.  The five ovate petals form a wide, shallow cup. Their acutely to bluntly pointed lobe tips curve out, spreading horizontally.

The five stamens are spreading to erect inside the cup where the petals meet, their anthers bilobed, pale to brown. The ovary comprises five carpels in a ring visible in the photo, inside the rings of petals and anthers. In the base of the cup is the lemon-green disc where the nectar is produced. The carpels will develop into the laterally flattened, five-horned fruit.