Home » GENERA D » Diosma » Diosma echinulata
Back to Category Overview
Total images in all categories: 11,635
Total number of hits on all images: 6,753,067 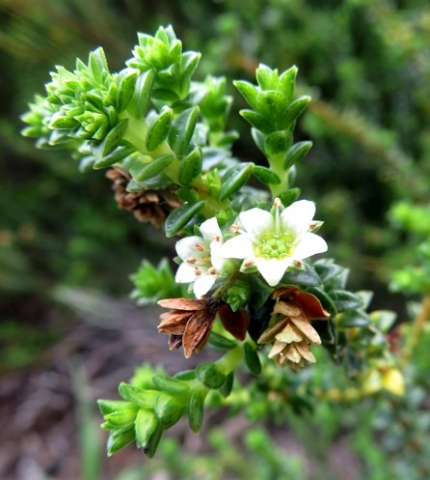 Diosma echinulata, commonly known as spiny bitterbuchu, is a rigidly and much-branched shrublet that spreads roundly, reaching 40 cm in height.

The stalkless leaves overlap imbricately in a neat pattern up the erect stems. They are small and ovate with acutely pointed tips. Their shiny, thickly fleshy blades are dark green to yellow-green and hairless. Where the spiny feature of the common name originates could not be determined, unless the leaf-tips might scratch.

The species distribution is coastal from Bredasdorp to Riversdale in the Western Cape.

The habitat is coastal fynbos on limestone hills and flats. The species is not considered to be threatened in its habitat early in the twenty first century (Bond and Goldblatt, 1984; Leistner, (Ed.), 2000; iNaturalist; http://redlist.sanbi.org).