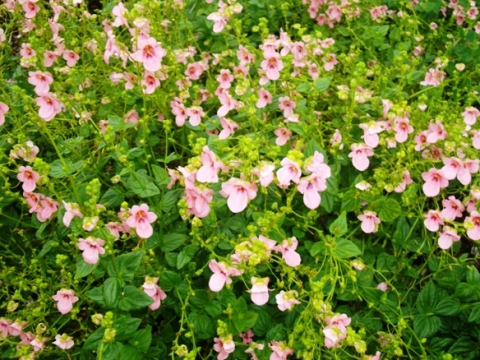 Diascia vigilis is a perennial herb from the Drakensberg area of the Free State and KwaZulu-Natal. It grows at varying high altitudes and is adapted to low temperatures and dry climates.

The plant spreads through stolons or horizontal above-ground shoots by which the plant feeds its new plantlets. These form at stolon nodes where roots and leaves emerge to become secondary plants, initially dependent on the mother plant. Eventually they will discard the connections to become independent plants, vegetatively produced. These colonies form a mat or colony, together with those grown from seed. Stolon-forming plants make good ground-covers and often also have spreading horizontal rhizomes underground. The strawberry is a well known example of a stoloniferous plant. So is Chlorophytum comosum, the hen-and-chickens (www.botgard.ucla.edu).

The leaves of D. vigilis are opposite, pale green and ovate, tapering towards the tip and may be hairy.

Flowers grow in racemes from upper branches. A profusion of flowers is produced starting in spring, continuing through summer and may even be there in favourable autumn conditions. The corolla is cup-shaped, five-lobed with the lower one a bigger lip coloured with dark markings at the throat. The upper petals have window-like patches, translucent yellow and maroon deep inside the corolla cup. At the back of the corolla (on the outside) the two spurs which are the hallmark of Diascia flowers, point downwards.

Pollination is performed by the female Rediviva bee that has long front legs, adapted to reach into the spurs where they find the special oil on offer. This oil is produced in glands called elaiophores positioned inside the spurs. The elaiophores are opened by these long front legs of the bee that absorb the oily contents like a sponge. While this upload is under way, pollen becomes attached to the bee from the anthers. If all goes well, the pollen is deposited upon the stigma of the next flower visited.

The oil for pollen depositing transaction has been valuable to both parties for a very long time. So much so that the variations of both species thus adapted to serve each other have survived as the fittest and longest surviving in their own evolutionary dance. More about this can be learnt in the article by Monique McQuillan of Kirstenbosch on http://www.plantzafrica.com/plantcd/diasciavigilis.htm.