Home » GENERA D-F » Diascia » Diascia mollis flowers and leaves
Back to Category Overview
Total images in all categories: 10,690
Total number of hits on all images: 5,351,803 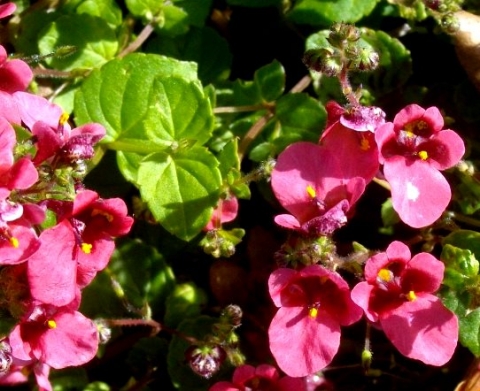 The flowers of Diascia mollis are semi-tubular and two-lipped or laterally symmetric. The short tube behind the cup-shaped upper corolla part has a pair of small spurs or pouches protruding at the back of the flower.

The four upper petals are small, the single lower one large, flat and rounded. The corolla is one-coloured, a deep rose-pink. The four stamens attached inside the corolla mouth grow in two unequal pairs, twisted around each other.

Below the corolla there is a five-lobed green calyx that may enlarge slightly in the fruiting stage. Flowering happens in summer.

The soft, fleshy, ovate leaves of D. mollis have pointed tips and sparse, angular teeth along the margins. A few curved lateral veins, sunken on the upper surface of the leaf and ascending from the midrib, miss the margins (Leistner, (Ed.), 2000; www.lifeisagarden.co.za).