Home » GENERA D-F » Diascia » Diascia anastrepta flowers
Back to Category Overview
Total images in all categories: 10,690
Total number of hits on all images: 5,351,984 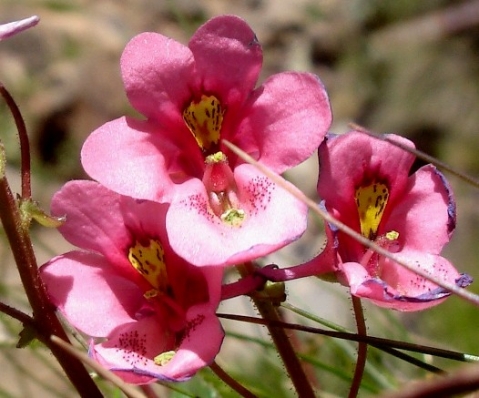 The rosy pink flower of Diascia anastrepta is two-lipped and five-lobed, rather similar to that of D. cordata. The lower lip is large and rounded, curving in at the tip, with two patches of tiny, dark, spotty glands. The upper lip is four-lobed; the lateral ones are larger, while the top two are joined with a widening yellow patch up their shared area. Some dark dots and lines appear in the yellow area, as well as dull pink markings.

Green and yellow anthers can be seen on pink filaments curving in towards each other. The openings of the spurs can be discerned in the base of the flower cup. Well-flowering specimens may produce many long racemes packed with flowers. Flowering begins in summer and lasts until early autumn. This flower was photographed early in January (Manning, 2009).