Home » GENERA D-F » Diascia » Diascia anastrepta buds
Back to Category Overview
Total images in all categories: 10,696
Total number of hits on all images: 5,357,089 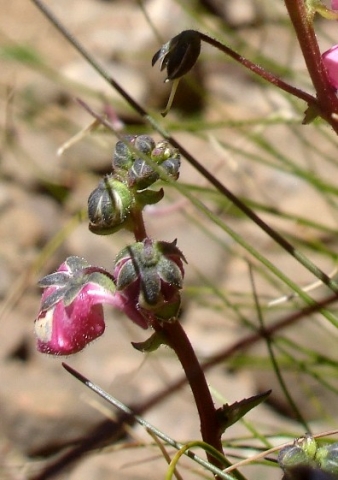 These buds of Diascia anastrepta show the pointed sepals with green and nearly black coloured patches quite well. The sepals have whitish margins as well as sparsely scattered shiny hairs.

The maroon pedicels that allow the buds to nod here, will pull them into erect positions upon opening. Prominent display contributes to catching pollinator eyes, while unintentionally also pleasing hungry beasts, as well as some creatures with an aesthetic sense.

Alternating leaf-like bracts with toothed margins and acute tips are visible up the raceme here, where the flowers emerge from the axils. White hairs appear on the outside of a corolla and one already prominent flower spur is showing.

Note the closing calyx at the top of the picture, from which the corolla has already dropped off. The white, straight style has a green stigma at its tip; probably having accepted and delivered pollen already into the ovary (Manning, 2009).