Home » GENERA C » Cyphostemma » Cyphostemma schlechteri
Back to Category Overview
Total images in all categories: 11,506
Total number of hits on all images: 6,488,555 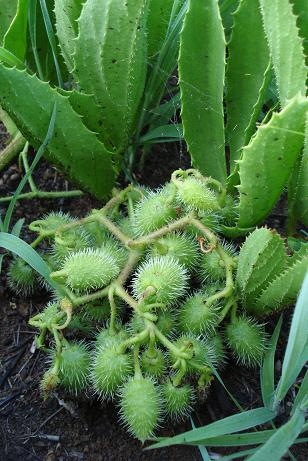 Cyphostemma schlechteri, in Afrikaans commonly known as the platdruif (flat grape), is a much-branched, low-growing and scrambling perennial with stems up to 1 m long. The succulent, hairless stems are green or pinkish with reddish tendrils.

The leaf comprises three to five grey-green leaflets, the central one biggest. The fleshy leaflets are borne erectly, often folded in along the midribs; the margins toothed. The leaf has a long petiole, the leaflets have short petiolules.

The flowers grow in clusters from leaf axils. They are small with greenish-yellow petals that are purple-tipped. Flowering happens in spring.

The fruit grow in clusters as in the photo. They are ellipsoid, covered in sparse, long hairs and turning red as they ripen. The fruit is fleshy and said to be edible and sweet, although there is an unpleasant aftertaste. By other accounts it is poisonous. So, better stay away!

The species distribution is in Maputaland in northern KwaZulu-Natal and in the Lebombo Mountains in Mpumalanga; also in Swaziland.

The habitat is forest and open woodland in rocky places in sandy soils, also coastally. The species is not considered to be threatened in its habitat early in the twenty first century (Smith, et al, 2017; Pooley, 1998; http://redlist.sanbi.org).