Home » GENERA C » Cyphostemma » Cyphostemma hardyi
Back to Category Overview
Total images in all categories: 12,061
Total number of hits on all images: 7,359,931 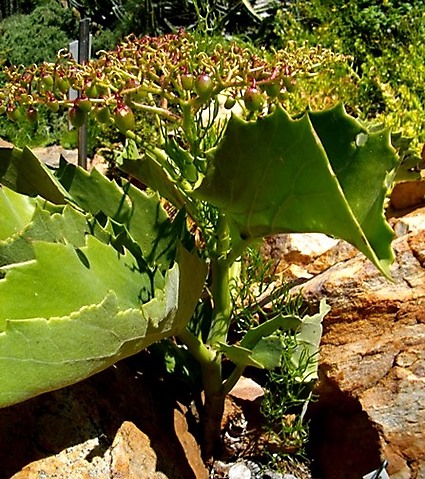 Previous
Image 1 of 17
Next

Cyphostemma hardyi is a large succulent, growing from a tuberous rootstock to heights around 60 cm. Taller plants are rarely seen in habitat due to damage caused by winter grass fires, the undamaged specimens mainly occurring in cultivation. This one was photographed in the Walter Sisulu National Botanical Garden during January.

The plant is a range-restricted South African endemic found only in part of the western Waterberg in Limpopo. It grows in shade among boulders of conglomerate on wooded slopes and bushveld. The species is vulnerable from illegal horticultural collection.

The leaves, fruits and stems are toxic, as are Cyphostemma plants in general (Smith, et al, 2017; Hardy and Fabian, 1992; Germishuizen and Fabian 1982; http://redlist.sanbi.org).