Home » GENERA C » Cyphostemma » Cyphostemma
Back to Category Overview
Total images in all categories: 11,901
Total number of hits on all images: 7,142,062 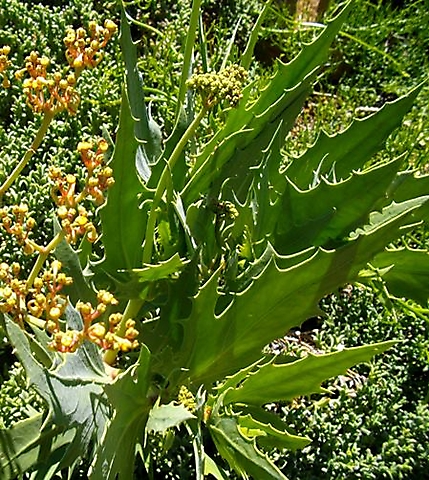 Cyphostemma, commonly tree-grape and in Afrikaans droog-my-keel (dry-my throat), is a genus of about 250 species of herbs, shrubs and trees with succulent stems in the Vitaceae family. They are erect, climbing or prostrate, the base usually a caudex. Tendrils grow on some of the climber species.

The alternate, digitate leaves comprise from three to nine leaflets, while some bear palmate or simple leaves. The leaves are stalked or stalkless and have stipules.

Inflorescences grow from leaf axils or opposite leaves at upper nodes, often many-flowered in corymb-structured cymes. The flowers are small, the cylindrical to flask-shaped buds constricted in about the centre. The calyx is entire or four-toothed, the yellowish corolla consisting of four hooded petals that wither early. There are four stamens and an ovary with semi-attached locules and a simple style, the stigma variously shaped.

The fruit is an ovoid to ellipsoid, sometimes hairy berry, usually containing one seed.

Southern Africa is home to 34 of the 250 species. They are found widespread in the region, apart from the west of South Africa.

The plant in picture bearing blue-grey, angularly lobed and toothed leaves and a large, horizontal inflorescence over the flowers, was seen in the Walter Sisulu National Botanical Garden in January, growing over a carpet of mesemb (Leistner, (Ed.), 2000).