Home » GENERA C » Cineraria » Cineraria saxifraga
Back to Category Overview
Total images in all categories: 11,894
Total number of hits on all images: 7,136,437 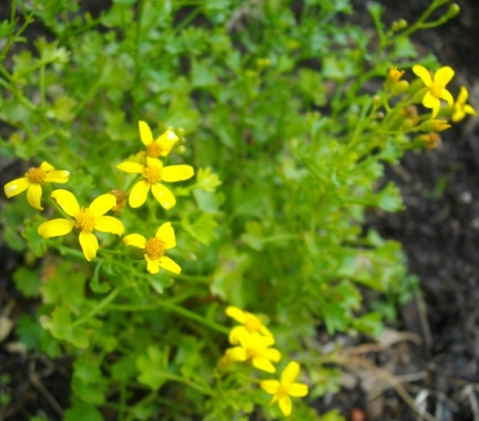 Cineraria saxifraga is one of about 32 Cineraria species indigenous to South Africa, some with ashen-grey leaves.

There are more of them in the rest of Africa and Madagascar. That island country has remarkable botanical diversity, much of which has relationships with southern African plants.

The hairless, light green leaves are, however, in the case of this species not ashen at all. The soft leaves are lobed to serrated and semi-circular. The rounded bush sometimes reaches a height of 30 cm.

It is the flower structure that usually plays the biggest role in proving the plant is a Cineraria, and which one. The yellow daisy has a sparse outer ring of female ray florets, in picture only five of them. The small clump of five-lobed disc florets protrudes above the rays. One row of green involucral bracts shapes the green tubular cup at the base of the flowerhead. Flowering occurs from spring to autumn.

The small black seeds fly in the wind during dispersal with the help of a small, white, hairy pappus.

The distribution of this, the wild cineraria, ranges from the southern Cape to the Eastern Cape.

The plant typically grows in rocky and shady places. The species is not considered to be threatened in its habitat early in the twenty first century.