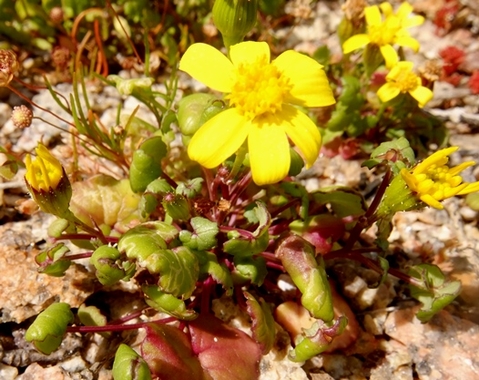 Previous
Image 2 of 16
Next

When a Cineraria geifolia flowerhead opens, the initially erect, yellow ray florets may still be thinly thread-like as here, their blades yet to unfurl, reach full length and spread.

As is the case with all cinerarias, the involucre comprises one row of about oblong, narrow bracts. The bracts are clear to see at budding time and again when the flowerhead fades. Between those two events the rays spread around the mostly erect head, concealing the involucre.

The plants can become considerably taller and widely rounded or scrambling while here it is producing several flowerheads while still quite small.

The peduncles of the flowerheads in view are less red than the leaf petioles (Manning, 2007; Mustart, et al, 1997; iNaturalist).