Home » GENERA C » Cineraria » Cineraria
Back to Category Overview
Total images in all categories: 11,894
Total number of hits on all images: 7,136,465 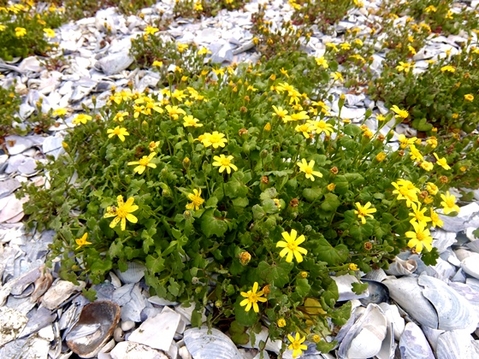 Cineraria is a genus of herbs and subshrubs in the Asteraceae family. The plants are sometimes hairy or grey-felted. The name cinerareus, a Latin word meaning related to ashes, refers to the grey, felted leaves of several of the species.

The stalked leaves are alternate, sometimes growing almost directly from the ground. The leaf-shape is often rounded and toothed or incised but not as deeply as the midrib, the margins rarely entire. The leaf bases are sometimes lobed with veins spreading from there.

The corymb-shaped inflorescences of yellow flowerheads mostly consist of both ray and disc florets. Each head is enveloped at the base by one row of narrow, green involucral bracts. The cohering bracts may have membranous margins. There are tiny bracteoles present at the base of the head. The receptacles are flat without scales.

The ray florets are female consisting of tubes and three-toothed blades. The mostly bisexual, otherwise male disc florets are tubular and five-lobed at their corolla tips. The anthers don’t have tails or spurs but are sometimes arrow-shaped. The styles are cylindrical ending in tufted branchlets or tipped by a tiny cone.

The black or brown fruits are flattened with thickened, sometimes hair-fringed margins. A pappus is present, consisting of long, barbed bristles that may drop off soon. Some species resemble Senecio plants that do not have flattened ray fruits.

There are about 50 species of Cineraria, all in Africa and Madagascar, 37 of which occur in southern Africa but absent from Botswana. Some cinerarias are garden subjects.