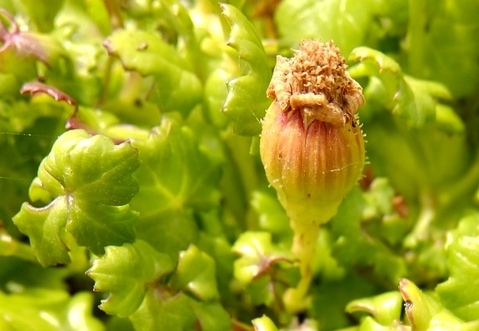 After flowering, the Cineraria geifolia flowerhead appears rounder, more elliptic and less oblong than during the bud stage. The involucral bract tips taper but do not curve out. Few hairs are scattered upon the bracts.

The now browned rays are tightly wound down in a ring around the protruding disc florets, by now all withered.

The leaves in picture have convex blades ending in pointy lobes, some turned purple or only on their margins (Manning, 2007; Mustart, et al, 1997; iNaturalist).