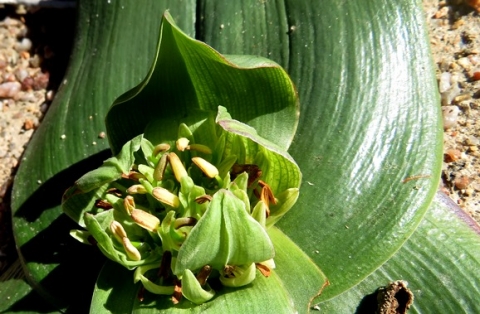 The Colchicum scabromarginatum inflorescence may have several leafy bracts erect among its flowers. They taper strongly to pointed tips and are longitudinally lined as are the two shiny leaves that are mostly flat on the ground.

Bract positions in the busy inflorescence may warp the rounded shape of some of the individual flowers. The “proper” flower shape is the six inwards-aiming anthers forming a ring with tepals behind each, the bracts outside the ring. In picture some flower parts became separated behind erect bract walls where they have to do their floral thing in isolation.

The anthers of a Colchicum may be more conspicuous or decorative in a floral sense than the lettuce-like tepals and bracts. But don’t assume it’s safe to add them to your salad (Le Roux, et al, 2005; iNaturalist).