Home » GENERA C » Colchicum » Colchicum scabromarginatum
Back to Category Overview
Total images in all categories: 10,853
Total number of hits on all images: 5,503,527 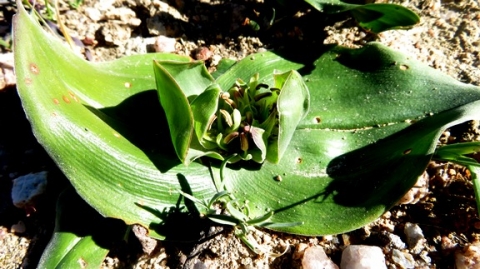 It grows two leathery green leaves opposite each other, flat on the ground or nearly so. The leaves are ovate in shape and taper or attenuate to acutely pointed tips. In picture they curve up and undulate, though not as much as the smaller bracts of the inflorescence in the centre.

The species is endemic to the Northern Cape where the plants grow in sandy soil among the Namaqua klipkoppe and in the Richtersveld. The species is not considered to be threatened in its habitat early in the twenty first century (Le Roux, et al, 2005; iNaturalist; http://redlist.sanbi.org).