Home » GENERA C » Colchicum » Colchicum striatum
Back to Category Overview
Total images in all categories: 10,853
Total number of hits on all images: 5,503,438 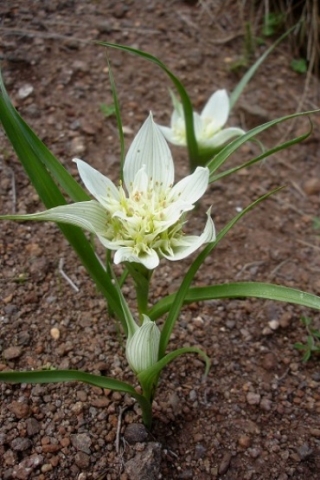 The specific name of Colchicum striatum is aptly the Latin word striatum meaning stripe. The typifying stripes occur on the much noticed white bracts around the shy flowerhead. The plant is a low-growing perennial issuing a few leaves, an erect stem and flowerhead annually from a small, dark, underground corm.

The plant is found in summer rainfall grassland among rocks in damp patches from the Eastern Cape to Namibia, Botswana, Swaziland and further north in tropical Africa, at least to Kenya. The plant occurs at altitudes from 1800 m to 3000 m.

A few broadly ovate leaves sheath the stem at its base and higher up (Germishuizen and Fabian, 1982; Blundell, 1987).