Home » GENERA C » Cheiridopsis » Cheiridopsis turbinata
Back to Category Overview
Total images in all categories: 11,538
Total number of hits on all images: 6,621,864 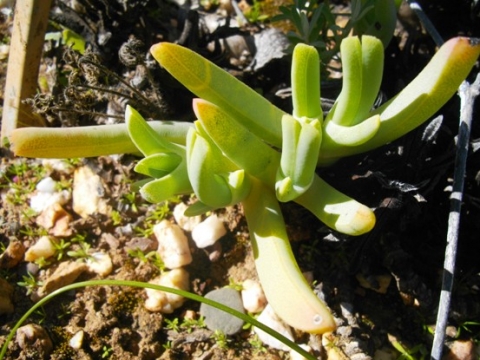 Cheiridopsis turbinata is a dwarf shrublet growing paired leaves. One or two new leaf pairs emerge from branch tips at the beginning of the winter rainy season. The leaf colour is grey-bluish to pale green, sometimes almost translucent. Each new pair replaces last year’s previous pair, which then withers away into dry papery sleeves during the next hot rest season. The leaves are long, erect, narrow, three-angled and oblong with a flat surface on the inside and a keel on the outside forming the other two surfaces. The keel curves inwards at the tip to meet the tapering ridges at the top of the inner surface margins.

The species is distributed in the Richtersveld and parts of Namaqualand.

The plant used to be called Cheiridopsis peersii. There is a variety called C. turbinata var. minor, which may be the plant shown here (http://davesgarden.co).