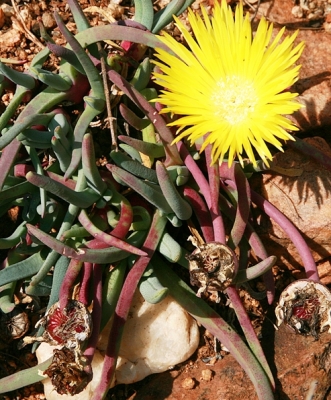 Several Cheiridopsis species are found in Namaqualand or are endemic to the region. In that region they grow in winter and mostly also flower then. Summer is a resting period for many Namaqualand succulent plants after the winter rains. Cheiridopsis and other members of the Aizoaceae family will wait in rest for the first rain when the seed capsules from last season's flowers will burst open to release their seeds.

Some Cheiridopsis species are low-growing or spreading dwarf plants while others grow into taller shrublets. The flowers have the common vygie shape with petals in a number of whorls around the central bunched stamens and styles.

This plant was thought to be a Cheiridopsis derenbergiana, earlier known as C. subaequalis, C. citrina and more names. When the genus was reduced by the taxonomists from 100 to 33 species, some names disappeared by slightly different plants being grouped together. This plant does not resemble the C. derenbergiana found under that name in the Karoo Desert National Botanical Garden also displayed in this Album. The guess is C. rostrata.