Home » GENERA A » Arctotheca » Arctotheca prostrata
Back to Category Overview
Total images in all categories: 11,779
Total number of hits on all images: 6,931,721 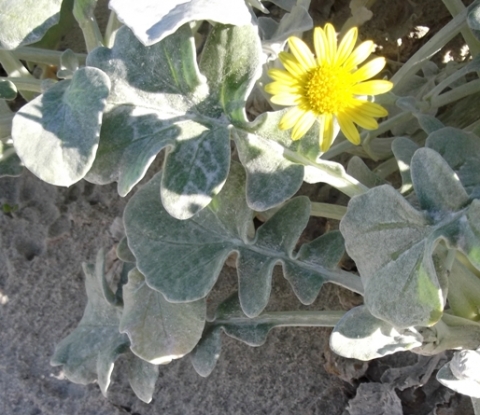 Arctotheca prostrata is a sprawling, mat-forming perennial that roots at its creeping stem nodes and becomes 15 cm tall. The green or grey leaves are dissected, lobed or scalloped, eared at the base.

The radiate, yellow flowerheads grow on hollow peduncles, becoming up to 4 cm in diameter, often smaller. The inner row of involucral bracts below the rays have whitish translucent tips. Flowering happens in spring.

The distribution is coastal from the Cape Peninsula to the Eastern Cape and north of some of the coastal mountains, e.g. in the Little Karoo.

The plant grows in sandy, clayey or loamy soils on flats and in low-lying areas. The species is not considered to be threatened in its habitat early in the twenty first century.

A. prostrata is listed as an invasive weed in Australia and California where it is known as prostrate capeweed (Vlok and Schutte-Vlok, 2010; Manning, 2009; iSpot; Wikipedia; www.redlist.sanbi.org).