Home » GENERA A » Aptosimum » Aptosimum spinescens leaves
Back to Category Overview
Total images in all categories: 10,169
Total number of hits on all images: 4,831,449 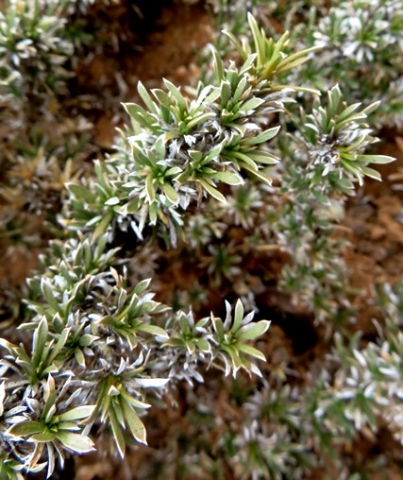 Aptosimum spinescens has several interesting names in Afrikaans, the language that dominated for a few centuries in parts of the arid karoid, sheep farming region of central South Africa.

Kankerblarebossie (little cancer leaves bush) reminds of the days when these leaves formed part of traditional treatment of cancer; how successful is unknown.

Who knows what medical uses of the plants growing around the early settlements these people discovered for themselves and what they learnt from the Khoi people who spoke Afrikaans as well in their time. The Khoi or Khoikhoi stock farmers lived on this land for many centuries before the Dutch descent farmers arrived. Earlier, the San hunter-gatherer tribes roamed this land for many centuries before the Khoi arrived and competed for a place in the sun that was always generous with everybody and everything here.

Rolvarkie (roll piglet) is another name for the plant that probably reflects the spiny aspect of the dense leaf covering of the low-growing plant.

Doringviooltjie (little thorn violet) recognises both the spines and the typical blue-violet flowers of the Aptosimum genus that earned the violet and viooltjie (Afrikaans) names in more of than one Aptosimum species.

The name aambeibossie (little piles or haemorrhoids bush) is shared with other plants like Chironia baccifera and Aerva leucura. It is unclear whether the plant causes or heals the condition or whether it is merely inadvisable for sufferers to sit upon the spiny bush.