Home » GENERA A » Aptosimum » Aptosimum spinescens
Back to Category Overview
Total images in all categories: 10,185
Total number of hits on all images: 4,843,442 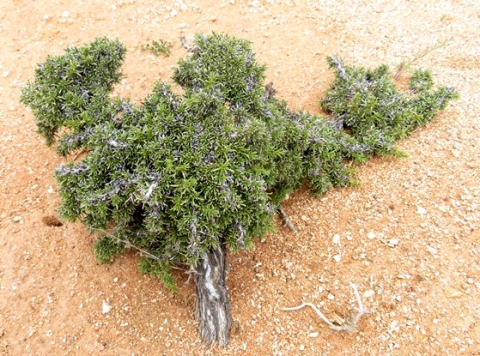 Aptosimum spinescens is a much-branched, cushion-forming shrublet reaching 30 cm in height. The woody dwarf plant bears spines up to 1,5 cm long on its stem, while the pointy tips of the narrow leaves also suggest this feature that caused the specific name of spinescens.

The species distribution is mainly in the Northern Cape but also in the Western and Eastern Cape and the Free State; also found in Namibia. This plant was seen in the Goegap Nature Reserve, southeast of Springbok, not flowering yet in August.

The plants grow on arid stony slopes, sandy flats and flood plains. The species is not considered to be threatened in its habitat early in the twenty first century.