Home » GENERA A » Aptosimum » Aptosimum lineare var. lineare
Back to Category Overview
Total images in all categories: 9,586
Total number of hits on all images: 4,312,531 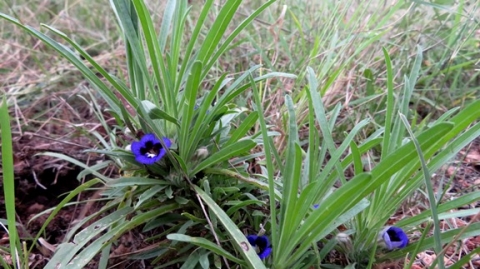 Aptosimum lineare var. lineare is a tufted to short-branched, low-growing perennial herb or undershrub that may develop a stem of up to 15 cm in length, supported by its dead leaf-bases. Var. lineare is the only variety of the species occurring in South Africa, the others grow further to the north.

The species is distributed across the northern parts of South Africa, only in the Mpumalanga, Limpopo, North West and Northern Cape provinces, as well as in neighbouring countries south of the equator.

The plants are found in lower altitude bushveld, sparsely wooded grassland and hot dry woodland, receiving average to low rain. It is sometimes called the bushveld aptosimum. The species is not considered to be threatened in its habitat early in the twenty first century (iNaturalist; JSTOR; www.zimbabweflora.co.zw; http://redlist.sanbi.org).