Home » GENERA A » Anginon » Anginon difforme bare stem
Back to Category Overview
Total images in all categories: 12,058
Total number of hits on all images: 7,353,523 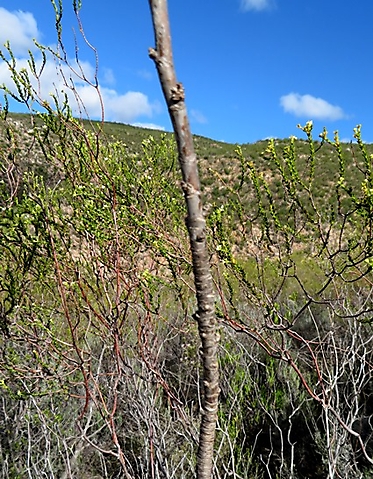 This bare Anginon difforme stem seen in the Kouga is straight and erect. Its bark is grey and brown in parts, while smooth between node ridges that encircle the stem.

These ridges correspond to the earlier sheathes of individual leaves that clasped the young stem near its tip long ago. It appears as if internode length may vary much on such stems, short in periods of slow growth and long when conditions and resources allow for quick elongation.

Small knobbly stumps of lost branches or failed buds remain scattered up the stem that typically focuses energy in the singular, central option over lots of lateral ones, as some species do.

The long and the short and the tall make up the world, always presenting something worth looking at (Curtis-Scott, et al, 2020; Vlok and Schutte-Vlok, 2015; Manning, 2007; Coates Palgrave, 2002; iNaturalist).