Home » GENERA A » Aloidendron » Aloidendron barberae flowers
Back to Category Overview
Total images in all categories: 11,506
Total number of hits on all images: 6,499,281 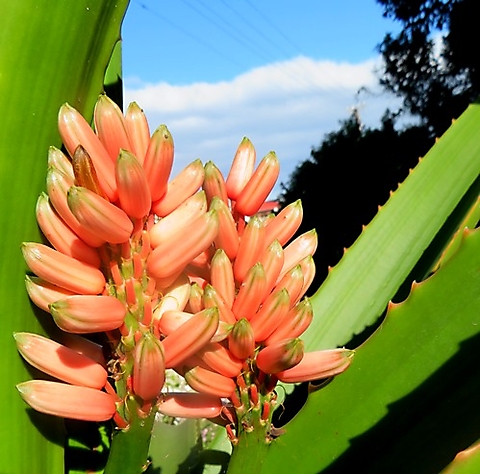 Previous
Image 4 of 23
Next

The inflorescences of Aloidendron barberae are short, seldom exceeding the leaf rosettes in height and often partly obscured by the leaves.

Single, erect racemes occur, or panicles of up to three branches, roughly in a single, vertical plane. The peduncle is somewhat flattened, about 3 cm thick. Floral bracts are about 1 cm long, coiled backwards. Racemes become up to 30 cm long.

The pinkish-orange flowers grow in compact, cylindrical racemes. More pink is seen on flowers of plants in the western parts of the distribution range in Mpumalanga and the Eastern Cape, more orange on flowers in the east, viz. KwaZulu-Natal, notably Maputaland. The perianths, also short (about 3,5 cm), have turned up and green tips, in human terms between snooty and envious. Much nectar is produced, keeping bees and other pollinators busy.

Not all the flower-coloured pedicels in picture have held on to their buds, although the early rains have been ample for this plant. Flowering happens in winter and spring. The photo of these pale, stubby, oblong buds was taken in June (Smith, et al, 2017; Van Wyk and Smith, 2003; Coates Palgrave, 2002; Pooley, 1993; Reynolds, 1974; Jeppe, 1969).