Home » GENERA A » Aloidendron » Aloidendron barberae
Back to Category Overview
Total images in all categories: 11,506
Total number of hits on all images: 6,499,245 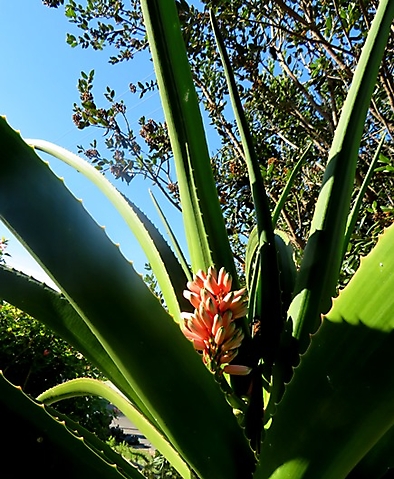 Aloidendron barberae, commonly the eastern tree aloe and previously Aloe barberae and A. bainesii respectively in botanical terms, reaches heights of 10 m to 20 m. It grows taller than all the other aloes and tree aloes, although not endowed with the bulkiest of stems (SA Tree List No. 28).

Young leaves are long and slender. They taper slowly and arch slightly, while on old plants they become short and curved strongly. Leaf surfaces are smooth, dark green, channelled above and thus convex below, forming a distinct U-shape.

The small, rigid, marginal teeth on the leaves are white or brown-tipped and somewhat unevenly spaced. These teeth are sometimes joined by a cartilaginous marginal ridge.

About 20 leaves make up a rosette as old leaves dry and drop off, leaving the stems smooth and bare below the rosettes.

The species distribution is coastal and inland at low and medium elevations in the Eastern Cape, KwaZulu-Natal, the eastern Mpumalanga Lowveld, Eswatini and southern Mozambique.

The habitat is forested kloofs, dense bush on mountain slopes but sometimes also grassland. The plants are adapted to compete for sunlight among other trees, while majestic when standing alone as mature specimens. The climate is temperate, the summers hot with high annual rainfall received in summer and no frost.  The species is not considered to be threatened in its habitat early in the twenty first century (Smith, et al, 2017; Van Wyk and Smith, 2003; Coates Palgrave, 2002; Reynolds, 1974; Jeppe, 1969; http://redlist.sanbi.org).