Home » GENERA A » Aloidendron » Aloidendron
Back to Category Overview
Total images in all categories: 11,506
Total number of hits on all images: 6,493,817 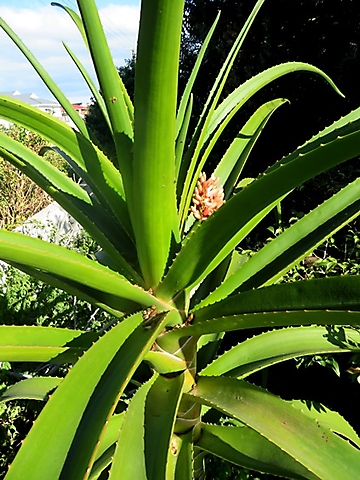 Aloidendron is a genus of tall, succulent plants in the Asphodelaceae or aloe family, commonly called tree aloes. They were moved from the Aloe genus to their own genus in 2013. The generic name, Aloidendron, is derived from the name of the Aloe genus and the Greek word dendron meaning tree, referring to the tree aloe status.

Several of the species are notably drought tolerant and long-lived, confined to low rainfall regions. Some species grow fast, others slow. Most of the species grow tall, single stems, some developing proper, large trunks although not consisting of hard wood. Only Aloidendron ramosissima has a short, squat main stem and multistemmed from near ground level.

Tree aloe stems branch equally or dichotomously as the rosettes split and lose their old leaves soon. This results in the very noticeable, smooth or longitudinally fissured, bare stems below the multiplying stem-tip rosettes. A powdery bloom is sometimes present on the stems.

The thickly succulent leaves only have marginal teeth, some species very small ones and sometimes with cartilaginous ridges linking the teeth. The blade surfaces are smooth and spotless, dark green on the higher rainfall species, pale grey or brownish on the dry region species. The leaves are angled up or recurve downwards, long or short and often channelled above.

The flowers grow in racemes of fairly short, branched panicles, often densely flowered and not tall above the leaves or sometimes hanging down. Perianth colour in South Africa varies from yellow in the western dry areas to shades of nearly red in the eastern, summer rainfall regions. The perianth shapes are cylindrical to three-angled.

There are about seven Aloidendron species, five of which occur in South Africa; three in the western arid parts receiving winter rain and two in the eastern, subtropical, higher summer rainfall region.

Some species are considered to be of least concern, others as vulnerable or endangered. All the South African species are protected and may not be removed or transported without permits. They are horticulturally sought after but the winter rainfall species do not grow easily in regions incompatible with the conditions of their natural habitat.