Home » GENERA A » Agapanthus » Agapanthus
Back to Category Overview
Total images in all categories: 12,058
Total number of hits on all images: 7,353,546 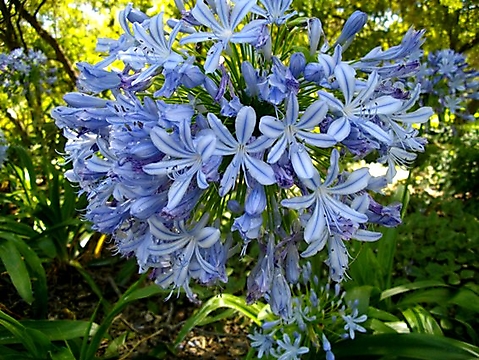 Agapanthus is a genus of monocot perennials that form colonies, growing from cylindrical, branched rhizomes with many fleshy roots. Numerous strap-shaped leaves grow distichous from the base.

Umbels of many stalked, bisexual, blue or white flowers grow on long, leafless peduncles well above the leaves. The short-tubed flower spreads its tepals in a cylindrical to bell-shaped or funnel-shaped corolla in two whorls of three each.

There are six stamens of two types arising from the perianth tube, arching up at their tips. The superior ovary is oblong to ovoid, consisting of three locules in which many ovules grow from the central axis.

The capsule is ovoid or spindle-shaped, opening per locule when ripe. The winged, black seeds are flat, ovate and shiny.

There are about ten species of Agapanthus, all occurring in southern Africa. Many popular cultivars have been produced in horticulture, mainly derived from Agapanthus praecox found along the southeastern coast of South Africa.

The plants are often associated with montane grassland at higher elevations. The photo was taken in the Walter Sisulu National Botanical Garden during January (Leistner, (Ed.), 2000; Manning, 2009).