Home » GENERA A » Agapanthus » Agapanthus praecox subsp. minimus at a forest edge
Back to Category Overview
Total images in all categories: 12,058
Total number of hits on all images: 7,353,576 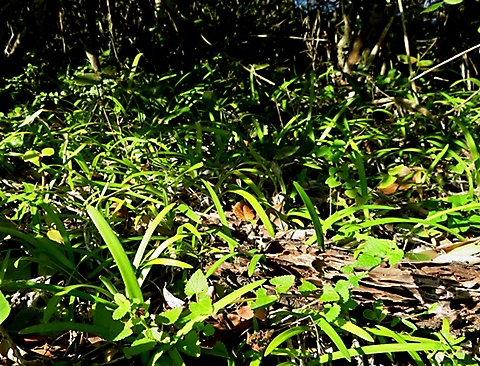 Agapanthus praecox subsp. minimus, commonly the dwarf blue lily, is an evergreen perennial, a small rhizomatous plant growing from thick roots. It bears strap-shaped leaves from the ground and flower stems between 40 cm and 60 cm tall during summer and early autumn.

The clear blue flowers are about 5 cm long. They grow stalked in umbels at the tips of sturdy peduncles. The flowers are trumpet-shaped with a dark line down the centre of each of the six tepals. The stamens are black and prominent.

This smaller subspecies is distributed mainly coastally from the east of the Western Cape through the Eastern Cape to the south of KwaZulu-Natal. The photo was taken at Nature's Valley during May.

These plants form large clumps in forest margins and on cliffs by the sea. The subspecies is not considered to be threatened in its habitat early in the twenty first century (Manning, 2007; Moriarty, 1997; Gledhill, 1981; iNaturalist; http://redlist.sanbi.org).