Home » GENERA A » Agapanthus » Agapanthus praecox fruit releasing black seeds
Back to Category Overview
Total images in all categories: 12,058
Total number of hits on all images: 7,353,555 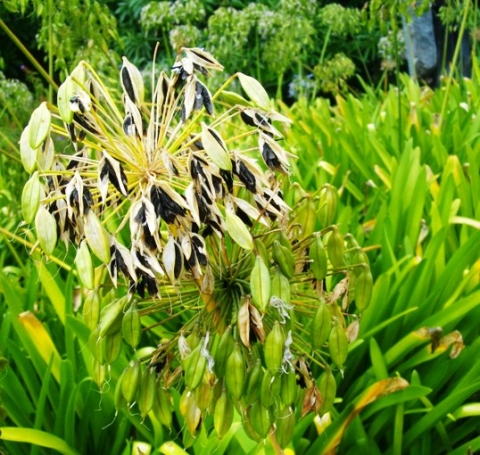 The black seeds of Agapanthus praecox, the bloulelie in Afrikaans, are being released from some capsules in picture, while others are still ripening. The seeds are black in papery coverings. The capsule is oblong, triangular in cross-section. It starts off green, turning almost white or pale brown as it dries, before dehiscing in late summer and autumn.

The rhizomatous roots and strap-like leaves are characteristic of Agapanthus plants generally. A. praecox is variable, three varieties having been formally recognized.

The summer flowers are blue or white, borne in umbels on stout stalks of up to 60 cm. The six tepals form a funnel-shaped, widely opening, lily-like flower. The flower is 3 cm to 7 cm long, its perianth tube up to half as long.

The A. praecox geographical distribution is coastal in the southeastern parts of South Africa, mainly from Knysna to the Transkei. The habitat is rocky ground, streambanks and thickets. The species is not considered to be threatened in its habitat early in the twenty first century.

This species is horticulturally the success of its genus. Apart from being a garden plant A. praecox is or was also used as an aphrodisiac. This and several other Agapanthus plants yield a variety of traditional medicines (Van Wyk and Gericke, 2000; www.plantzafrica.com).