Home » GENERA A » Agapanthus » Agapanthus campanulatus flowers
Back to Category Overview
Total images in all categories: 12,058
Total number of hits on all images: 7,353,439 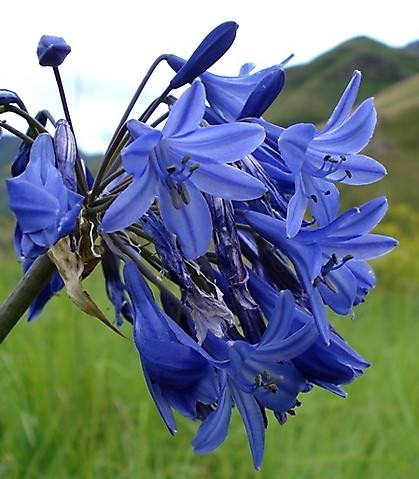 Previous
Image 5 of 12
Next

The flowers of Agapanthus campanulatus grow on long, leafless scapes. Two bracts at the top of each scape enclose the flowers in bud. Heights achieved by the inflorescences vary from 40 cm to 1 m.

Each umbel comprises ten to thirty funnel-shaped flowers in varying shades of blue. A central dark blue line is present on each tepal that becomes less than 3,5 cm long.

The six stamens grow from tepal bases. The anthers are blue and the pollen lilac, characteristics shared with some other Agapanthus species. Blooming happens in summer, sometimes into early autumn.

The species is divided into two subspecies. Subsp. campanulatus has a long perianth tube, the tepals spreading less than those of subsp. patens. The former subspecies has the smaller distribution, mainly in KwaZulu-Natal, the latter extending to Limpopo (Manning, 2009; Pooley, 1998; Van Wyk and Malan, 1997; www.plantzafrica.com).