Home » GENERA A » Agapanthus » Agapanthus campanulatus
Back to Category Overview
Total images in all categories: 12,058
Total number of hits on all images: 7,353,492 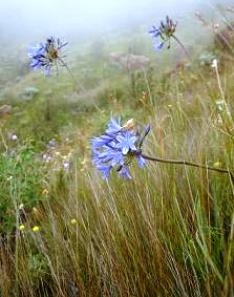 Agapanthus campanulatus, commonly the bell agapanthus or in Afrikaans the bloulelie (blue lily), is a deciduous perennial, as are three more of the seven South African species of this genus.

The leaves are strap-shaped, slender and keeled with stem-like, purplish bases. They grow every spring from the plant's short, thick rhizome. Agapanthus plants forming clumps. Leaf colour is grey-green to glossy green. Leaf dimensions are from 15 cm to 50 cm long and from 1 cm to 2,5 cm wide.

The species distribution is in the Eastern Cape, KwaZulu-Natal, the Free State and the provinces north of the Vaal River.

Common in Drakensberg grassland where the photo was taken, the plants grow in spring and summer, remaining dormant during the cold and dry winters. Neither of the two recognised subspecies is considered to be threatened in its habitat early in the twenty first century (Manning, 2009; www.plantzafrica.com; http://redlist.sanbi.org).