Home » GENERA A » Agapanthus » Agapanthus africanus
Back to Category Overview
Total images in all categories: 12,058
Total number of hits on all images: 7,353,500 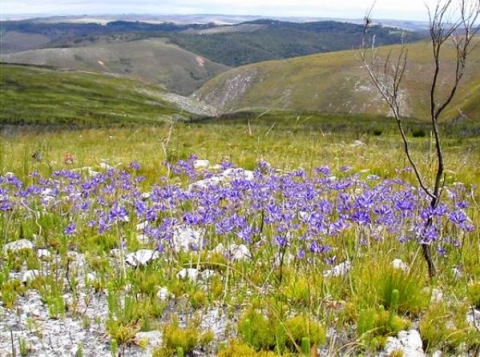 Agapanthus africanus is said to be difficult to cultivate (unlike A. praecox). It does not survive freezing temperatures, which prevents it from growing higher than about 1000 m above sea level.

It flowers particularly well after fynbos fires and survives the fires comparatively easily due to the fleshy core at the plant base and root system.

The plant's habitat is winter rainfall fynbos. The plants grow in rocky, sandstone derived, acid soils, usually in cooler places. The species is not considered to be threatened in its habitat early in the twenty first century.

The species distribution is in the Western Cape, from the Cape Peninsula as far as Swellendam.

The more well-known relative, A. praecox, is the common garden plant that yielded so many horticultural cultivars (www.plantzafrica.com; http://redlist.sanbi.org).