Home » GENERA A » Adenium » Adenium oleifolium
Back to Category Overview
Total images in all categories: 12,058
Total number of hits on all images: 7,353,480 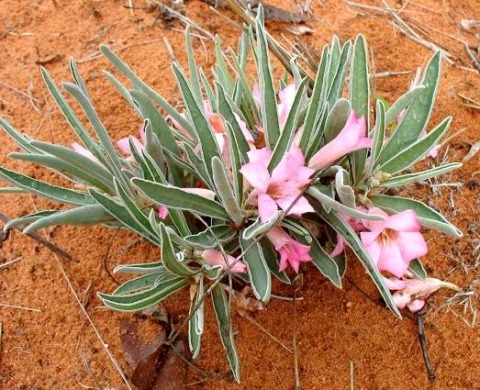 Adenium oleifolium, commonly known as ouheip from the San or Khoi days, is a slow-growing geophyte with large underground caudex. Other generally used common names for this plant, bitterkambro and Kalahari-impalalelie also remind of the days when indigenous tribes knew kambro and impala as words in everyday use, denoting consumer products of the day.

The caudex of this plant may exceed 25 cm in diameter in mature specimens, the above-ground parts rarely taller than 50 cm. The branches emerging from the tuber are densely hairy when young, smooth later.

The narrow, oblong leaves (up to 11 cm long), are crowded near the branch tips, channelled on their upper surfaces, the leaf margins entire. Leaf colour is olive green to dark grey-green above, paler below.

The small pink, salmon or red flowers grow in stem-tip inflorescences. A flower has a wide, whitish tube and five spreading petal lobes, the flower from 2 cm to 5 cm in diameter. There are faint nectar guides on the corolla. Flowering happens in summer. The fruit follicles persist on the plant, ripening slowly, the seeds large for Adenium.

The species distribution is in the arid interior of the country, in the Northern Cape, North West and Limpopo, as well as in countries beyond the border, including Namibia and Botswana.

Hot summers, cold winter nights and low rainfall characterise the Kalahari, an important part of this plant’s habitat. Succulents are not particularly common or rich in species diversity here.

Sparsely grassed or arid scrub veld with some Vachellia erioloba (camel thorn) don’t quite cover the bare sandy patches that dominate outside the rainy season. A. oleifolium typically grows on stony ridges, limestone outcrops or in the sandy Kalahari soil at elevations from 700 m to 1200 m. The species is not considered to be threatened in its habitat early in the twenty first century (Van Jaarsveld, et al, 2006; www.plantzafrica.com; http://adenium.tucsoncactus.org; www.redlist.sanbi.org).