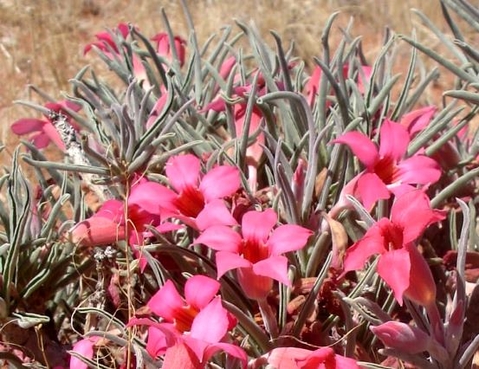 Adenium is a genus of succulent shrublets, shrubs and (marginally) small trees in the Apocynaceae or dogbane family (not to be confused with the Adenia genus of the Passifloraceae family).

Adenium stems are often swollen and tuberous at the base or partly underground, called caudiciform, often involving unusual shapes. The branches are usually fleshy, the plants mostly winter deciduous. Adenium plants contain poisonous milky latex, as do many other Apocynaceae plants.

The simple leaves are alternate, spiralling or in stem-tip fascicles, on short petioles or sessile. Leaf axil glands are conspicuous, while stipules are small or absent. The leaves have entire margins.

The inflorescences are few-flowered, short-stalked, stem-tip cymes. The calyx lobes are divided deeply, lance-shaped or linear and tapering to sharp points.

The flowers vary in colour from pink or red to purple, sometimes bicoloured including some white. The corollas are funnel-shaped to bell-shaped on short cylindrical bases. The corolla lobes are about as long as the tube, ovate to obovate and overlapping to the right. There are small pairs of scales in the corolla mouth, alternating with the lobes.

The flower has four stamens with short filaments and an ovary comprising two free carpels. The style is short and cylindrical. The fruits are paired follicles and the seeds linear to oblong with hair tufts at both ends, dropping off early.

There are five species of Adenium in Africa and Arabia, three of which occur in the northern parts of South Africa. The plants are of interest in horticulture due to their caudices and flowers.

The plant in picture is Adenium oleifolium (Leistner, (Ed.), 2000; Wikipedia).