Home » GENERA A » Adenium » Adenium oleifolium in habitat
Back to Category Overview
Total images in all categories: 12,058
Total number of hits on all images: 7,353,474 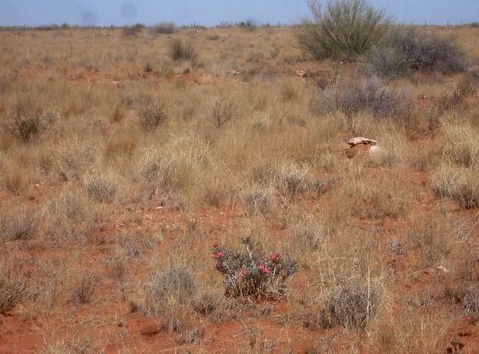 The harsh world where Adenium oleifolium makes its living does not hide the plant well when it flowers. This is just fine as flowering plants live with the risk of conspicuous colours inviting pollinators inevitably also attracting the attention of those that may cause harm.

Many mechanisms, such as numerous flowers, increased distribution ranges, subterranean bulbs, long flowering seasons, hairy coverings, bitter tastes and other safety measures help different plants to some extent. But there is no life without risk, especially since the living eat the living.

The paradox of ingesting as well as poisoning is encountered repeatedly among the uses of South African indigenous plants. Be sure to know what you’re doing, is the ubiquitous caveat. And be assured that A. oleifolium, as so many other plants bearing poison, features widely in the traditional medicine of local people; still more plant destruction.

A powdery product derived from the A. oleifolium tuber is used in treating snake bite and scorpion sting. While you’re at it, add some fevers for which it has been used and don’t forget the stomach aches. All medical practices include some experimentation as every individual is unique, after all! Better try something more instead of letting the patient die; a feature of best practices that does not always work.

People living off the land learn lots of stuff. The school fees are forgotten long before the old wives’ tales. And the wonders of results based upon a sample of one can be so compelling when one is cornered (Van Rooyen and Van Rooyen, 2019; Frandsen, 2017; iNaturalist; http://www.llifle.com; https://worldofsucculents.com).