Home » GENERA A » Adenium » Adenium multiflorum
Back to Category Overview
Total images in all categories: 12,058
Total number of hits on all images: 7,353,574 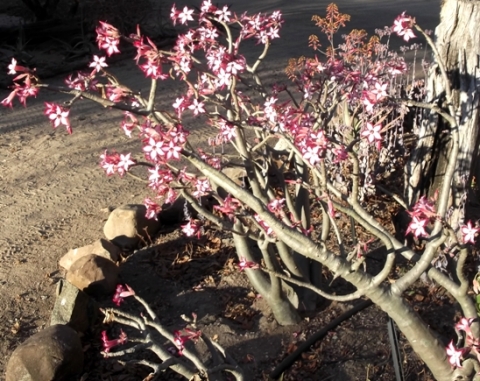 Although Adenium multiflorum is listed among the numbered indigenous trees of South Africa in the National List of Indigenous Trees produced by the Dendrological Foundation (No. 647.3), it is usually only a succulent shrub or shrublet. It grows sparsely branched swollen stems to 3 m tall, smooth and pale grey in colour. The shape of the plant has been likened to that of the baobab tree, their sizes being vastly different.

A. multiflorum is deciduous, its leaves appearing only after the winter flowers when summer brings rain. The leaves are alternate, paddle-shaped and hairless.

Commonly known as the impala lily or Sabie star, it grows in the northeast of the country, in Limpopo, Mpumalanga and KwaZulu-Natal, as well as in parts of Mozambique, Zimbabwe and Swaziland.

The Sabie River runs through this region and antelopes called impala roam the wooded grassland and arid woodland in large herds. The species is not considered to be threatened in its habitat early in the twenty first century (Manning, 2009; www.plantzafrica.com; http://redlist.sanbi.org).