A strangler fig in action 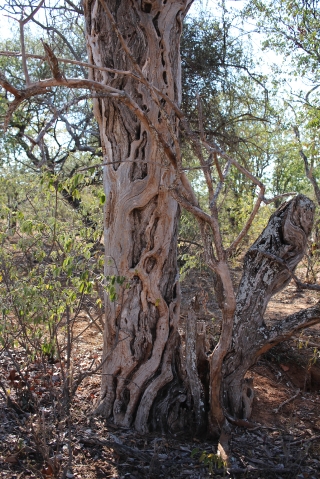 There are many strangler fig species that start off on host trees of whatever kind and live by slowly choking them to death. The sticky seed of a strangler fig starts the process by clinging to something in a hollow of a cleft between branches, up in the available tree of its moment. Some dirt may also conveniently have accumulated here, expediting matters for the new life where bird or animal eats a ripe fig and deposits a seed.

In this way a fig seed could even land in cleft or crotch of another fig tree. When it grows on another tree of its own species, merging by inosculation may happen and nobody dies. When trees of different kinds are involved, this soft option is not available.

Developing above the ground as an epiphyte upon its (different species) host plant, the intruding fig isn’t a parasite, merely a resident accepting its particular challenge of living conditions.

Epiphytic growth commonly occurs in tropical rain forests. Many rain forests receive important ecological contributions from a variety of fig species. Their fruits for instance feed resident or visiting animals and birds, while playing an important part in wasps that are often "paired" with their own fig species for reproduction.

Fig seedlings may not be able to succeed on the forest floor directly when there is excessive shade, even if moisture and nutrients are plentiful. The beginning fig plant up in the tree obtains nutrients from rain, sunlight filtered through the leaves and leaf litter compost that collect in the host tree cleft, accompanied by tiny quantities of blown sand and dust.

Once the sapling establishes itself, aerial roots are sent down to the ground, hanging freely or creeping down the host trunk, until anchoring themselves in the soil. This is the moment when new growth accelerates, contact with the ground triggering the plant. Direct access to the nutrients and moisture of the soil may do wonders for air roots.

For instance, big banyan trees or Ficus benghalensis, the national tree of India found widely in the Orient, grow many large secondary stems that start off as aerial roots. A secondary stem starts on the tree when an air root cluster reaches the ground away from the main trunk. A big banyan may resemble a small forest of secondary stems while remaining a single tree. Young banyans strangle host trees with the best of the strangler figs though.

A young strangler fig of any species can be seen as a bit of an ungrateful brat. It usurps territory over the body of its host with no regard for the care giver of its baby days. It will cover host roots and overshadowing its leaves at speed as it gathers strength. This eventually denies the host a share of nutrient and moisture supplies from the ground and photosynthesis from sunlight.

The host branches die off one by one as the originally innocent-looking intruder steals the show completely. The host’s demise reiterates that every living thing looks out for itself, that life everywhere strives with all its might without deviation from purpose.

Diminishing physical proof of the existence of a consumed host tree assumes temporary tombstone status in the forest until its last molecule returns to service in another life form or waiting to do so in an unmarked queue. Thus, every forest citizen remains forever, broken down into parts, strewn close and far, in a dance of countless cells and molecules that live and die in the “eternal” forest and its surrounds.

Strangling other trees is, however, not the key to fig tree survival in nature throughout this large genus. It is but one of numerous adaptations resorted to in terrestrial fig evolution over the 80 million years or so of the genus living on earth. During that time an increasing number and variety of fig trees, shrubs and climbers survived the dinosaurs and more.

Inventive fights for survival make many families of living entities on earth wondrously diversified. A truly wonderful and unique range of distinctive fig solutions to life challenges awaits those that care to look more closely.