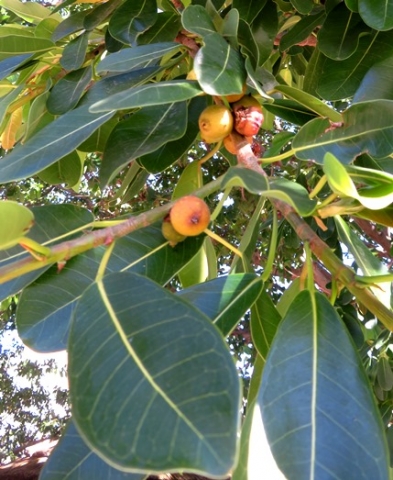 Previous
Image 1 of 60
Next

Fig leaves are mostly alternate, simple and lobed. There are more evergreens than deciduous species, the deciduous ones commonly found in colder climates.

The flower types or a combination of them are produced in three distinctive syconia during the stages of the fruiting season. The first syconium or early fig (in Afrikaans voorvy (before fig)), is produced in spring, containing male flowers and gall flowers (female flowers bearing short styles).

Female pollinator wasps can lay eggs only in syconiums where the female flowers are gall flowers, as the long styles of the other female flower type interfere with their ability to lay eggs. Every fig species has co-evolved in association with its own pollinator wasp species over a very long time during which many generations of both underwent almost imperceptible changes in a mutual process.

Survival of the fittest here means more of those fig trees and wasps possessing the appropriate characteristics survived long enough to produce offspring, while those inappropriately endowed died more before procreating, bringing about natural selection in a dogged or macabre type of gradualism. A bit like Moses giving the troublemakers forty years to die out before tackling the next challenge with a more suitable generation.

This type of miracle takes too much time for observing as a show by any mortals... what else but people attends shows in our world anyway? And what fun is an excruciatingly slow show in which most actors die without memorable actions? History is such a convenient invention: one can ignore all the bits that don't fit one's requirements of the moment while compressing the rest into a suitable number of pages or words. Still, how it all comes about is a miracle.

Wingless male and winged female wasps hatch by summer from these first syconiums. The male bites his way into the gall containing a female and mates with her. The female, leaving through the hole at the tip of the fig, becomes pollen-covered from the male flowers also present in her birthplace. The pollen is carried in convenient tiny sacs, like supermarket ones but no plastic.

She searches for a place to lay her eggs and finds the second syconium, another type produced during summer on the same fig species. This syconium, the true fig entered by the female wasp, bears only long-styled, fertile, female flowers. She enters, not knowing the place won’t be suitable, but the visit has its purpose. During her visit and attempting to lay eggs, she drops off the pollen sacs as one might do with surplus baggage when becoming utterly frustrated.

So, by autumn, another type of fig, the third syconium containing only short-styled gall flowers have grown on the tree, bringing the female wasp her solution. The eggs laid here develop in these gall flowers, producing the following year’s fig wasps.

Apart from the real pollination fig wasps of a particular fig species, there are often several other, non-pollinating wasp species, parasitic ones, not mated in the "normal" way with a fig species. These outsider wasp species lay their eggs by penetrating the fig fruit walls. Their eggs hatch among the larvae of the wasp that operated inside and all comers then benefit alike, eating fig; something like cuckoo wasps.

There are bracts at syconia mouths called ostioles, growing in several series, spreading or directed into the figs, functional in pollen loading and off-loading. Nature "thinks" of everything, without thought or deliberate planning she plays a role everywhere in the becoming of life forms through evolution.

Male fig flowers have one to six petals and one to six stamens. Female flowers bear up to eight petals around the ovary. There are one or two styles, the stigma usually oblong.

The real Ficus fruits are tiny nuts in fleshy fig coverings. They develop on the inside of the walls of the fig eaten by many, green or another colour depending on the species. A fig ripens about five days after the hole at its tip opens and the pollinators depart. Wasps that die inside are absorbed by the fruit. So one usually doesn’t chew wasp with fig delicatessen, the crunchy bits being fig seeds.

The nature of nature is always to accommodate something more, always finding space for yet another species. Wherever conceivable or imaginable in the global (or universal) entity of life, nature places more life, or life places more nature, making herself more in quantity and concept.

Humans, merely one species noted for evolving a significant cerebral survival feature, now contemplate travelling to Mars, the earth's moon or moons of other planets of our sun... for a start. This is in accordance with life's purpose of spreading life with a singularity of vision as if there is nothing else for it to do.

And there isn't, for all the rest of what happens in the living world can safely be left to life's products or components, the life forms created. It is through ants and elephants, mice and men, as well as all the plants and other living things that living output is manifested, meaning is manufactured in minds and moods.

Should sufficient attempts at universal movement among living entities occur in cerebral species from inhabited exoplanets, success may be measured in transported life of unimaginable biodiversity into all corners of the universe. A universal garden of life, a Magnum Eden, the size of the universe, may come about in the distant future. Not one day, for what will a day be without a singular earth to define it?

Life being the ultimate gardener, its strategy competition (and symbiosis) among all its charges for general refinement to survive. Forever becoming therefore drives biodiversity of the living in the universe. Forever, or who knows? All the skies witness the continual unfolding of life in all the worlds of the whole world, but no skies are limits, for it's all expanding at an enormous rate, remember?

All this is not starting sometime in the future. A change in mindset and it's here, happening now and we're part of it. We're capable of thinking big, living in a biodiverse universe, our Magnum Eden on all the "earths", shared widely and not looking back but forward.

Extraterrestrial species, if they exist, should hurry though, given the rate of universal expansion occurring. Humanity appears a little backward in its social evolution for becoming a real player in such a league of posting life in some form in all directions, many lightyears away.

Should humanity succeed in ruining life on earth for many, most or all, it may only mean a blip on some screens far away. Life processes may continue unaffected in many far-off places, only slightly concerned or unconcerned with the loss of Homer, Shakespeare, Sappho, Beethoven, Mozart, Moses, Einstein, Darwin, Nureyev, da Vinci and others. Every planetary civilisation after all has its own top achievers, be they animate winds, fungi, fire beasties or nine-legged ersatz cockroaches breathing somewhere. Or it may all go quiet forever, the worlds shunning carbon as a hooligan element, continuing inorganically in unimaginable peace.

Nature, life, the core vibrant entity multiplying itself so vigorously wherever possible, is strangely enough not thought of by people as having the ability to conceive or imagine. She is capable though of providing almost every conceivable type of lodging in places characterised by certain intervals of temperature, pressure, moisture and other relevant variables, forever testing more limits of those intervals. Where lodgings are provided, multiple old and new species benefit, becoming the feeding solutions for each other. Every conceivable kind of hunger that life might encounter on behalf of its constituent species, is sated from the biomass in stock, growing biodiversity everywhere, also giving people food for thought.

This means, roughly, that every living thing out there is edible by something else living in its neighbourhood. If your eggs, your leaves, your fruits or whatever you own are not eaten, your young, your body or your forgotten carcass will be. All biological substances are of interest to some biological something out there, wanting to make it in the living stakes, all the time.

If you live on earth and have no dedicated consumer of your flesh or equivalent substance now, it will be there in the future, evolved from some or other organism, as all potential gaps in nature tend to be filled, already when they start to develop. Everything lives as long as it can and dies trying hard not to, because it shares a spark from the universal life that puts the key ingredient of life in everything, overseeing the drive in everything to procreate with all possible gusto. All do this amidst the constraints of serving other species as food.

This results in everything trying to overproduce itself with vigour, because losses will occur and the species needs to be safeguarded, not the specimen. Life energy is spent in accordance with this principle although no brain may be available to direct activities; the lust for life being equal in the brainy and the brainless. All existing life forms are thus winners of a sort in their time, having (so far) overcome all the odds.

There are 750 Ficus species on earth, some say 900. Asia and Australia have about 500 fig species, Africa and Madagascar have 100 and southern Africa 26.

And the commonly eaten fruit, the widely cultivated fig known almost everywhere on earth? Ficus carica is of Asian origin, a species known since ancient times as food, also around the Mediterranean Sea, valued in Eden and Classical Athens. It exists today in many cultivars as a crop plant and has colonised, i.e. has been naturalised in many parts beyond its original geographical domain.

Those concerning themselves with such questions, speculate that the leaves used by Adam and Eve after their mishap in Eden were probably picked off F. sycomorus trees. Some, however, eyed and named the Adam fig, a cultivar of F. carica that bears leaves of an appropriate size for decorous application.

The tree in picture, planted near Citrusdal, might be F. cordata, if its leaves weren’t so shiny and lacking basal lobes and lateral veins from the leaf bases (Coates Palgrave, 2002; Leistner, (Ed.), 2000; Pooley, 1993; Encyclopaedia Britannica; Wikipedia).