Home » GENERA E-F » Ficus » Ficus ingens evidence of a quest
Back to Category Overview
Total images in all categories: 11,905
Total number of hits on all images: 7,156,027

Ficus ingens evidence of a quest 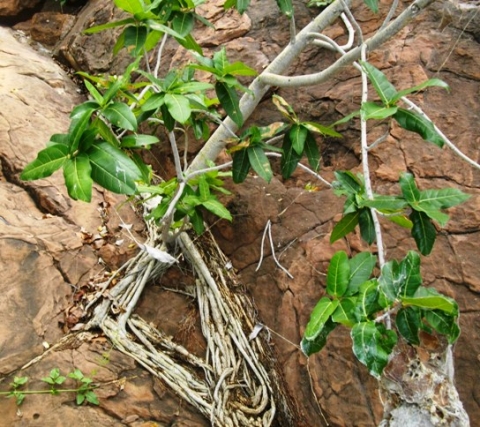 The roots of Ficus ingens will spread across a solid rock surface as in the photo if they fail to find hair-crack opportunities for penetrating and eventually splitting the rock. Some roots have clearly had their way with this rock, while others meandered in the open for a long time, Odysseus-like, trying to find the way home.

These roots seem to have been going round and round, eventually morphing into stem-like appearance when giving up the prospect of below-ground living.

Several other South African Ficus species split rocks, notably F. abutilifolia and F. ilicina while others, including F. burtt-davyi and F. craterostoma strangle nearby trees by enveloping them in their branches like boa constrictors. Don't mess with a fig tree if you lack speed.

Both these processes represent slow-wrestling actions, the aggressive movements restricted to the growth rate of the plant parts involved. Still, the enormous forces exerted leave impressive results, the struggle for life being a selfish act, in trees conducted with neither malice nor concern for fellow beings (Coates Palgrave, 2002; Wikipedia; www.plantzafrica.com).