Home » GENERA E-F » Ficus » Ficus ingens roots on hard rock
Back to Category Overview
Total images in all categories: 11,905
Total number of hits on all images: 7,155,893 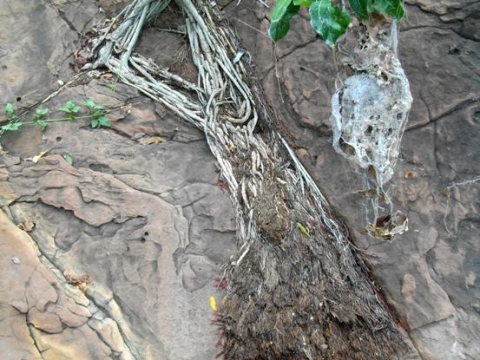 These Ficus ingens roots have struggled hard and long to find the out of sight opportunity for underground living like normal roots. Their upper parts have turned whitish, covered in bark similar to stems, while the hairy dark parts below have multiplied into a dense mass, capturing some dust particles over time to create an earthy living space.

The covered roots deep inside this mass will use rain water and incidental nutrients that might arrive to serve the plant as roots commonly do, albeit not as effectively as their counterparts gone down into normal life. And dogged fortitude is still being shown by the new reddish bits of root on the side, scouting for the hair crack in the rock that will bring nirvana.

Dangling from the leafy branch on the right a large whitish structure can be seen. This is the nest of some social spiders that show solidarity with these roots, building in a manner resembling the valiant efforts below them. What detritus the spiders might drop could well serve as nutrition for the tree.

In nature nobody is ever quite alone, accompanied by many also absorbed in the compelling occupation of dodging death (Coates Palgrave, 2002; Wikipedia; www.plantzafrica.com).