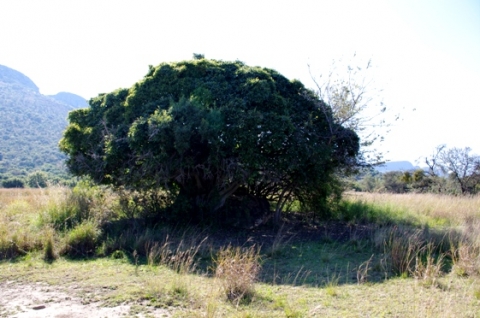 Ficus ingens, the red-leaved fig, becomes a small to medium-sized tree with a broadly rounded crown (SA Tree List No. 55). The height attained is variable, but where conditions permit it may grow to 13 m, the branches spreading to 30 m wide. The specific name ingens means huge. Giant specimens are few in South Africa, making people say that the name is a misnomer. But Africa is large: not all that lives there is reported.

Little globose to pear-shaped figs grow in pairs from upper branchlets. They grow on short stalks from leaf axils and are about 1 cm in diameter. A thick, milky latex is exuded by the figs, stems and leaves when they are bruised or cut. The fig, a receptacle with numerous tiny flowers on its inside, varies in colour from pink, dull red to yellowish brown on its outside.

There are 27 Ficus species in southern Africa, about 750 on earth. Australia alone has 500 of them; with much scope for wasps (Coates Palgrave, 2002; www.plantzafrica.com).