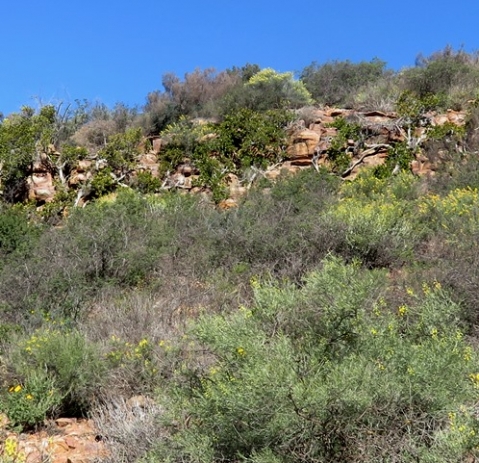 It takes many years for Ficus ilicina to spread itself over a vertical, bare rockface in this fashion. The rock-splitting fig shows its white bark where the leaves don’t cover them. Hugging the rock, even plastered upon it, the tree uses space not easily taken by the other plants of the vicinity.

Who knows whether all that is visible up there, like writing on the wall belongs to one plant? (Might it spell your name?) The veld retains some mysteries, divulging them in instalments. This time aloof from those that walked the long route through this Naries kloof near Springbok.

Not shy of full sun, the west-facing cliff where the tree is perched ensures more than enough of that. The seasonal watercourse not far away compensates, probably has some fig roots right in its bed, benefiting directly from every inundation.

The red figlets of F. ilicina grow solitary or in pairs on short stalks or sessile from leaf axils of terminal branchlets. The hairless or downy figs are only about 1 cm in diameter.

F. ilicina is a resident of the north-western arid parts of South Africa and more widespread in Namibia. If you meet it in Namibia, you might point at it and impress your companions by calling it omupendarwa, its name in the language of a local tribe, the Herero. In German it is called Kletterfeige.

The species lives in kloofs and on cliffs or rocky outcrops. It is not considered to be threatened in its habitat early in the twenty first century (Mannheimer and Curtis, (Eds.), 2009; Coates Palgrave, 2002; iNaturalist; http://redlist.sanbi.org).